Mayor of London
You are here: Home > What we do > Transatlantic tech campaign

Attracting US tech companies to expand to London.

American tech entrepreneurs, execs and investors are shaping the British tech ecosystem. Watch our video to hear their stories and how they recommend London to other US businesses.

Taking the London tech story across the Atlantic

In March 2016 we launched a joint initiative with the Department for International Trade (previously UK Trade & Investment) and the GREAT Britain campaign targeting US technology businesses looking to expand into London and the UK.

The aim of the campaign was to showcase London's tech expertise and encourage US businesses to expand into London, helping create jobs and growth for our city.

Visit our business website invest.london to find out more about how we help international companies expand to London. 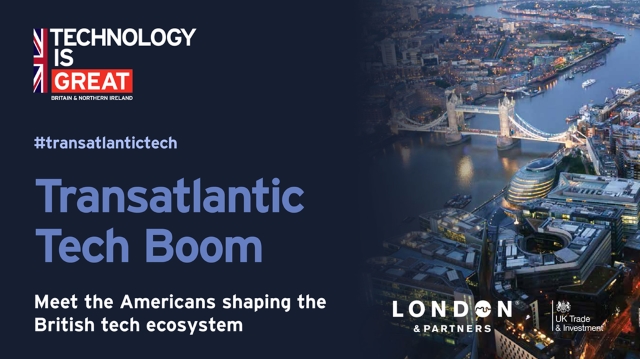 The campaign was officially launched at an exclusive event at the Great British House at the global film, music and digital festival - South by SouthWest (SXSW).

The event showcased the brightest American and British figures from the UK’s tech scene including keynote speeches from Russ Shaw, founder of Tech London Advocates, Ben Medlock, Co-founder of SwiftKey and a live performance from British singer-song-writer and music-tech entrepreneur, Beatie Wolfe.

We run these campaigns to keep London in the minds of businesses looking to expand from their home markets. Our business team persuade companies to choose London and guide them through the process of setting up business in the city.

For an international business coming to a new city you need to have someone on the ground. London & Partners came in and helped bring us into London.
Eric Benz, VP Business Development, ZipZap

London & Partners is the international trade, investment and promotion agency for London. Contact us to find out more about what we do, come and work for us or understand how London could benefit your brand.