Bringing USAs most popular sport to the UKs growing fan-base 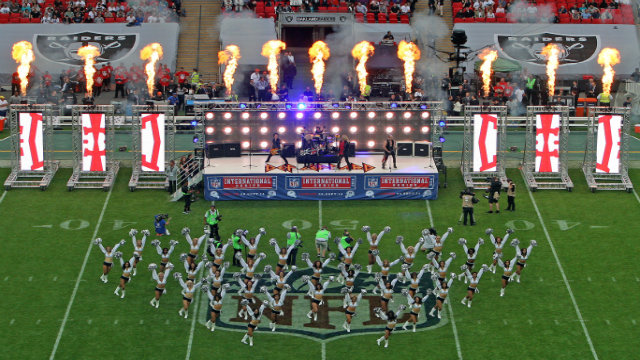 In 2007, the first International Series Game between the Miami Dolphins and New York Giants was played at Wembley. In 2013, the annual fixture increased to two games and the series has since grown with four games being played in 2019 at Wembley and Tottenham Hotspurs’ new Stadium in Northumberland Park, to sell-out crowds. In addition, free to attend events have taken place and included the NFL on Regents Street and NFL Kickoff at Piccadilly. The Tail Gates take place on an annual basis at Wembley.

Business case development
We worked with the National Football League (NFL) to bring its first international competitive game to London (2007). This included providing Mayoral endorsement, use of the Mayor's venues and marketing support.

Marketing campaigns
We targeted media and leisure campaign activity in New York and Miami including media promotion in NY with black taxis and a "London-hosted" game screening in Miami. We've also hosted the Jacksonville Jaguars home team picks during the live televised NFL Draft since 2015.

Evaluation
We provided support on a detailed Economic Impact study and explored the feasibility of more permanent training and accommodation facilities in London (in conjunction with GLA).

Attendees to NFL on Regent Street